I trailered Mona Risa out to the ramp at the Jo Bonner campground on Canyon Ferry. It’s a low traffic, shallow ramp with some shade. It’s the same place that Rich and I assembled the original boat that I pulled back from Canada.

Sliding arms on the trailer are a great idea for assembly. Much easier than trying to assemble/disassemble the hulls in the water without tipping them over - which is almost impossible by yourself. Still, assembly on the trailer is a difficult project since things are up off the ground and there is lots of climbing up and down. It took four hours to put the boat together (and a little under four to take it apart later). I don’t think that time would get much shorter with practice.

Launch and retrieval from the trailer worked well. I ran a webbing strap from cleats on the aft beam under the deck to the winch on the trailer.

Yay! The boat was once again in the water after four years. A great moment. Short-lived though. 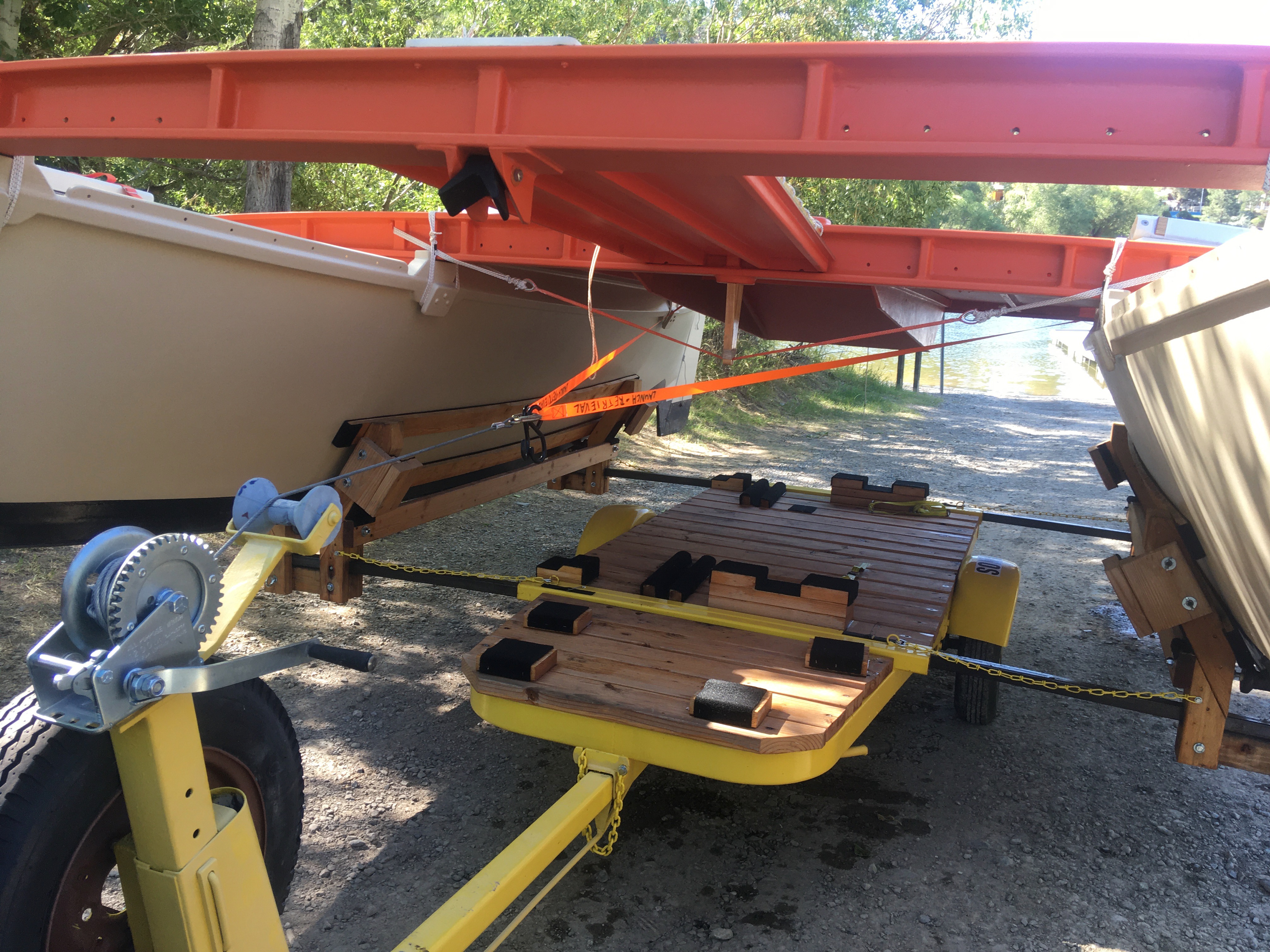 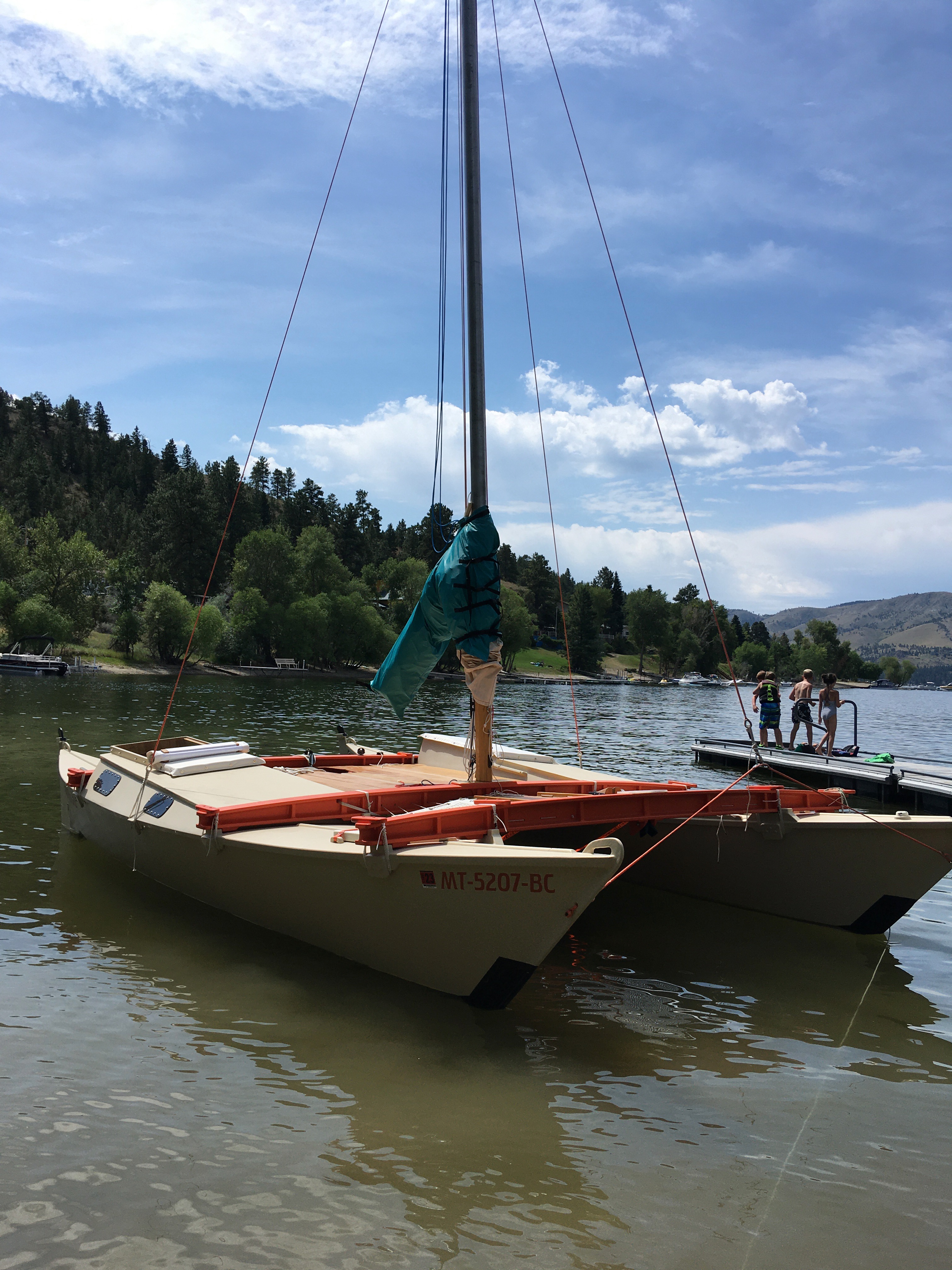 Though I had raised the mast in the backyard several times and left it up for a few days - I wasn’t happyy with the lack of tension in shrouds and the way the mast looked after getting the boat on the water. So I took the mast down (in disgust). And decided I would just motor instead of deal with that problem right now. 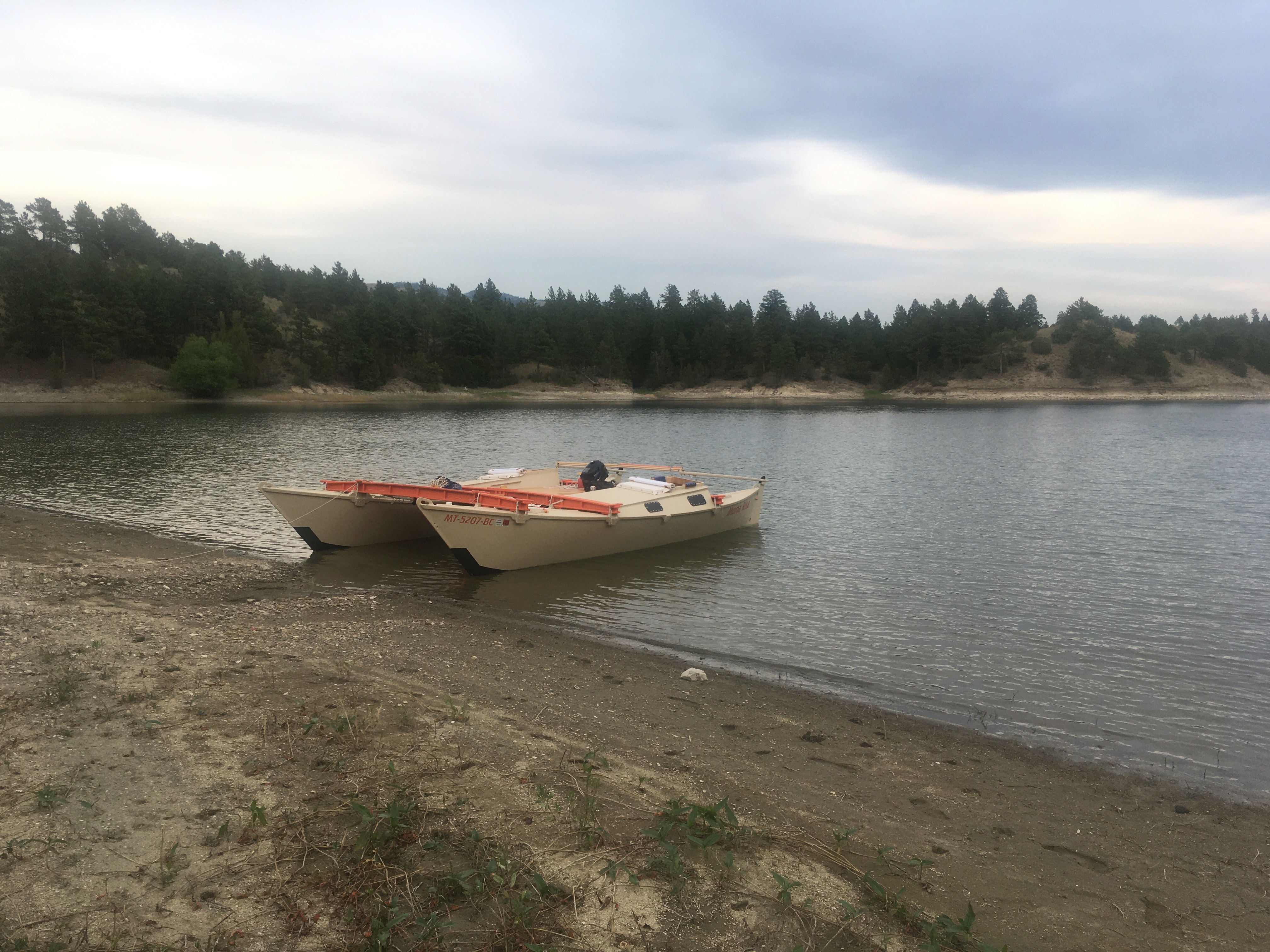 But motoring was tough! Even the smallest boat wakes caused ventilation and racing. The motor was a long shaft and I had lowered the mounting position when I built the transom in the center platform. Not long enough I guess. Need a super long shaft motor. I sold the motor right after this trip since I knew it wasn’t going to work.

I spent four nights camping at a couple of spots on the lake. The weather was perfect and it was a joy to lounge about on the deck and sleep under the stars. The deck was a great place to cook as well. I will definitely need some shade, but for this trip I just found shade on shore when I needed it. I did not spend any nights sleeping in the hulls since the weather was so pleasant. 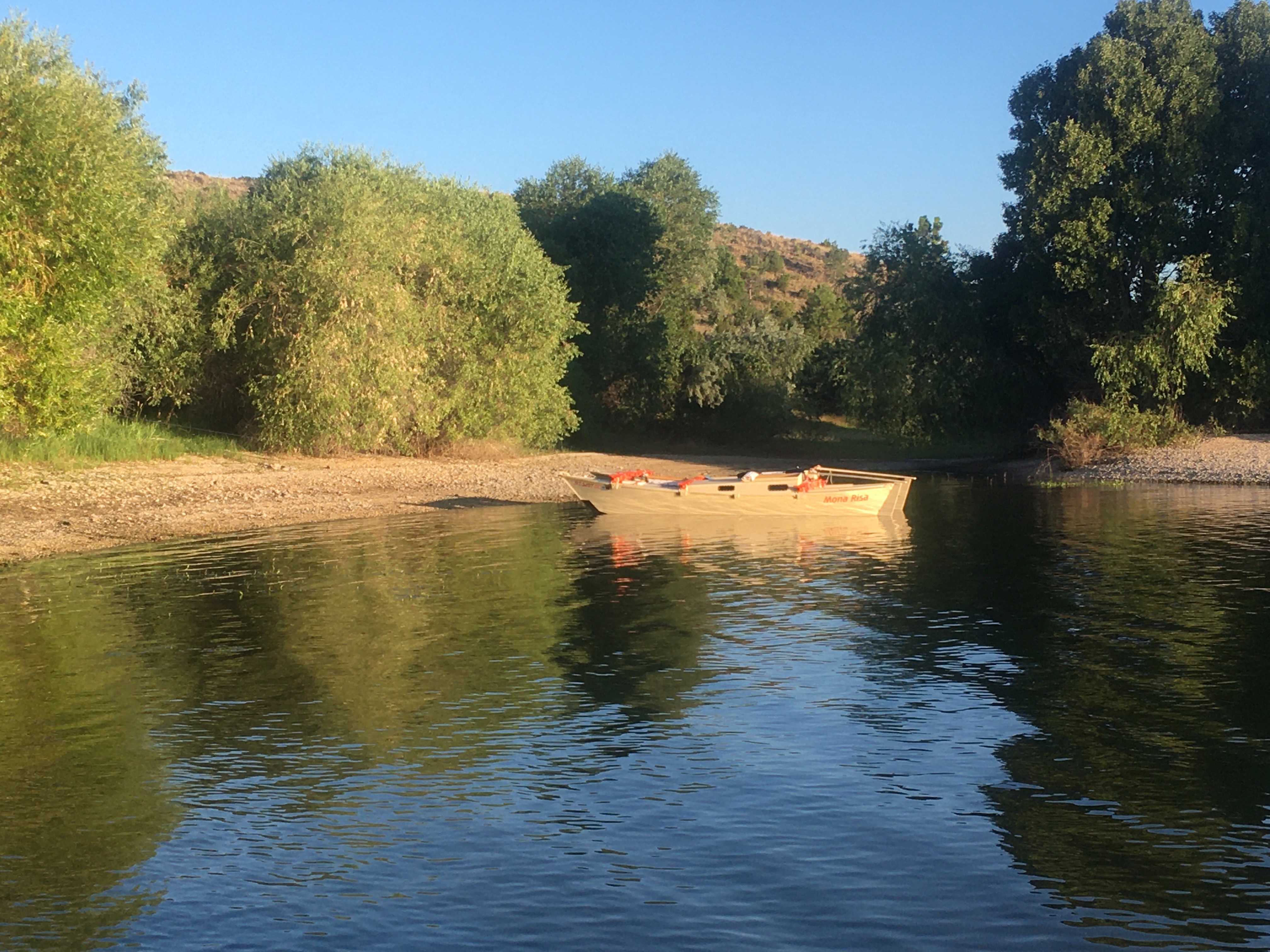 After the maiden voyage, I put the boat straight into an enclosed storage rental. I was about to start a new job and wouldn’t have anything but weekends off for a while. That schedule wasn’t reasonable for a boat that needed 8 hours of work to launch and retrieve. And slip prices for a wide catamaran were more than I wanted to pay. 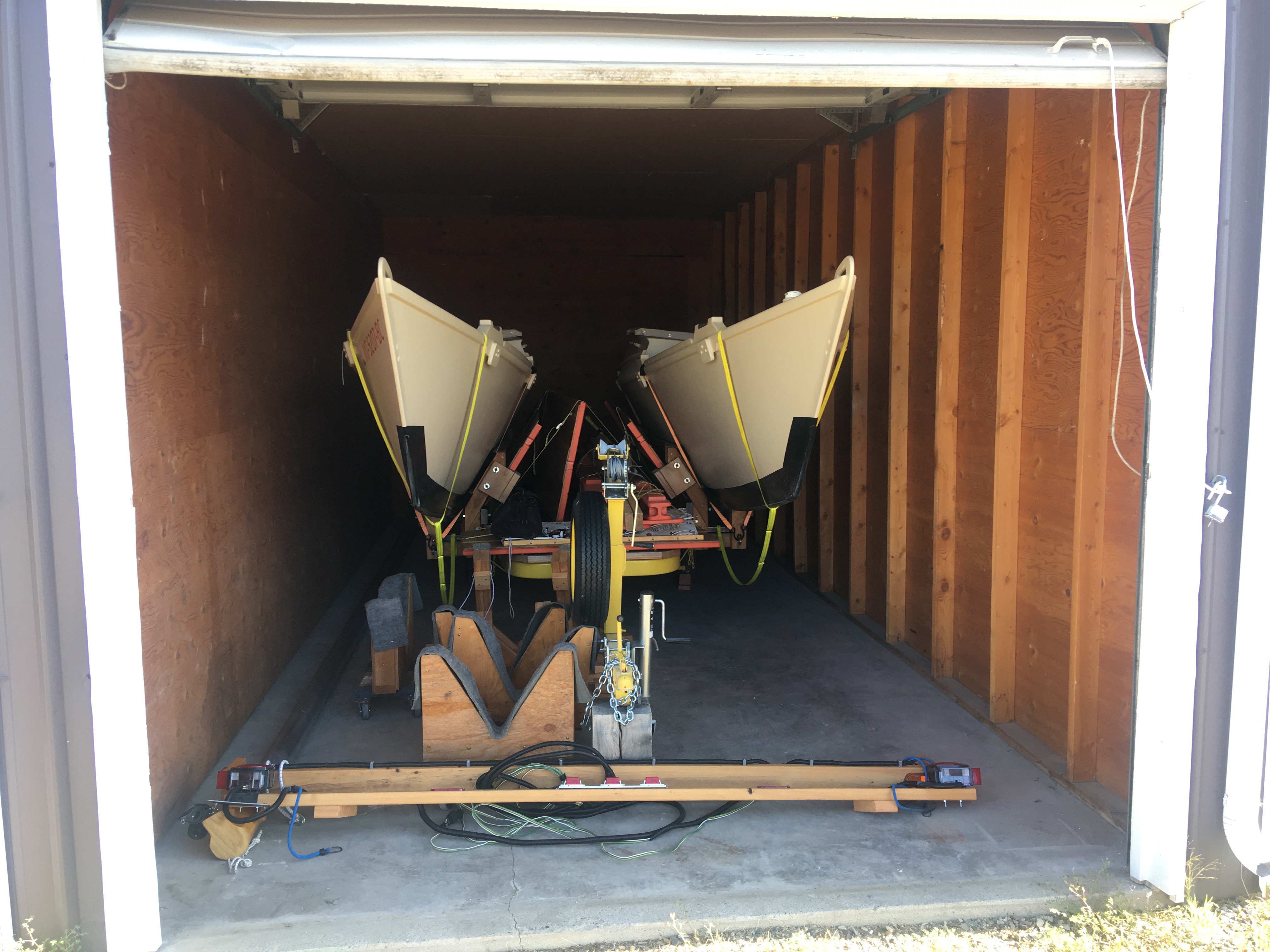