I really did not want to rebuild the beams. I really tried to talk myself out of it! But it didn’t work when I started listing the problems:

According to the building plans, I needed to find some soft, knot-free wood for the top and bottom of the beams. I couldn’t find anything in a soft wood at my usual sources and ended up at Helena Hardwoods. They had some poplar that was knot-free, but poplar is a very weak wood. The owner said that a lot of the boat builders that come in use ash for their boats. I assumed that these were probably drift boats that would get a lot of abuse. It seemed like ash would be too heavy for a Wharram cat, but I also knew that the beams would take a lot abuse from anchor chains and blocks and equipment. So ash it was.

I bought 4/4” ash and needed to do some planing to get it to the right size. It was a good thing that Pete had a planer! Both of us underestimated how much work and how much sawdust it took to get all the wood down to 3/4”. I reserved enough 1” stock for all the compression struts. I used a 1/2” roundover bit in my router to roll the edges on the beam tops and bottom and the stock for the compression struts.

Using the measurements in the plans, I created a template in 1/8” hardboard of the plywood webbing in the middle of the beams. I used strategically placed screws to attach the template to 5/8” plywood. And then used a router with a template bit to cut each half of the webbing for each beam. I came out with 6 pieces that were almost identical.

Assembling and gluing the beams is a lot of work! There are ~70 compression struts to attach first. When the struts were glued and the wires removed, I paused to trim them flush and apply two coats of epoxy to the struts and the webbing.

I applied two coats of epoxy to the inner sides of the top and bottom boards before gluing. I attached the tops of the beams first. The work involves a lot of wire ties and a lot of patience. Good thing I had a slow curing epoxy and cool temperatures. I found that trying to feed wire ties while I was gluing was difficult. So I cut the wire ties long and threaded them all before gluing. The long wires left me enough room to apply thickened epoxy from a squeeze bag. 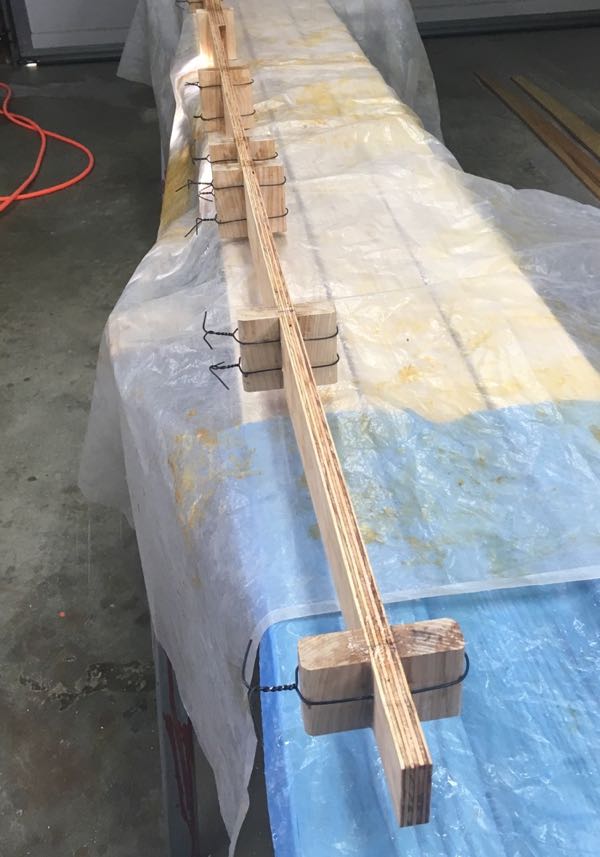 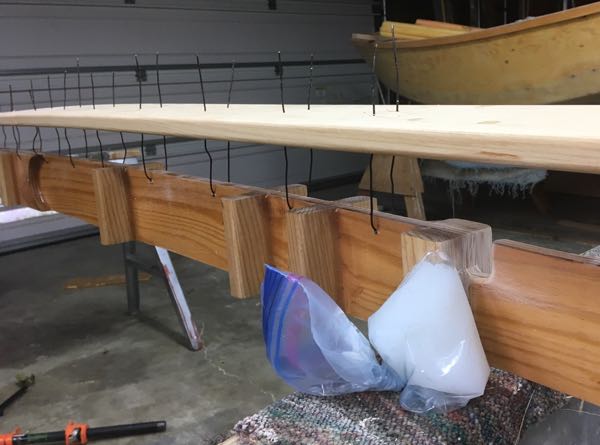 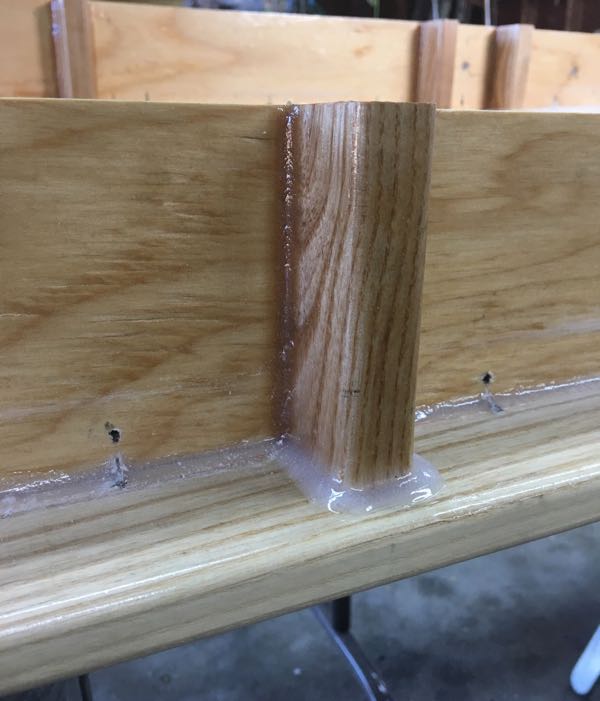 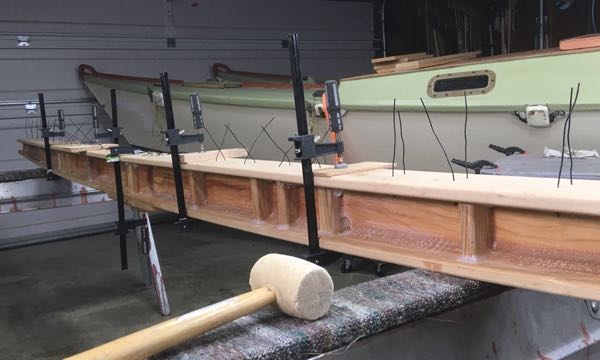 The tedious work on the beams continues! The fillets are tough because there are so many and they are in tight spaces. I did all the top fillets before gluing on the bottom of the beam so that made things a little easier. The bottom fillets were harder work once the space got smaller. I cut some filleting tools of the correct radius out of Bondo applicators to help reach into tight places. 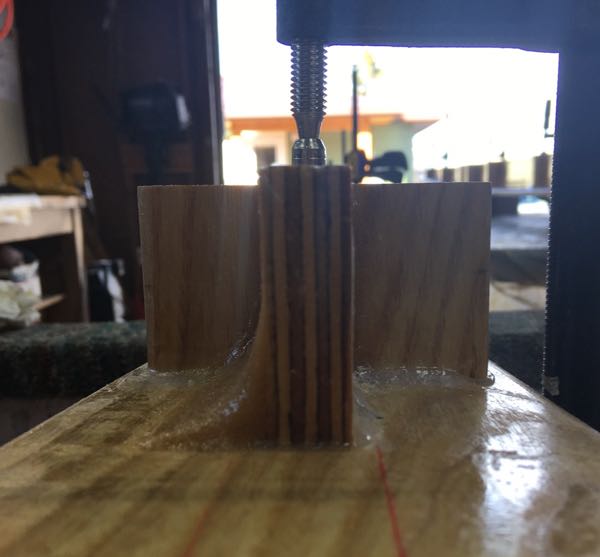 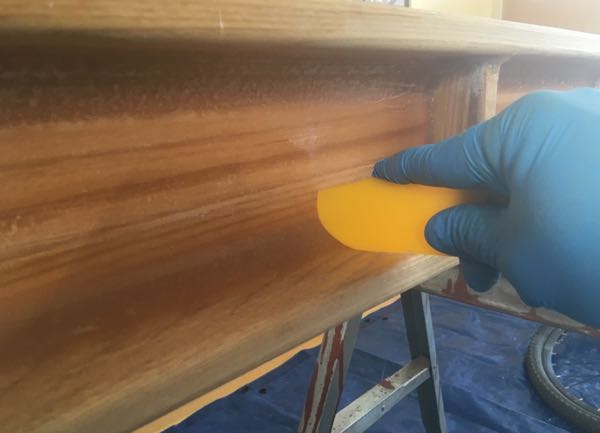 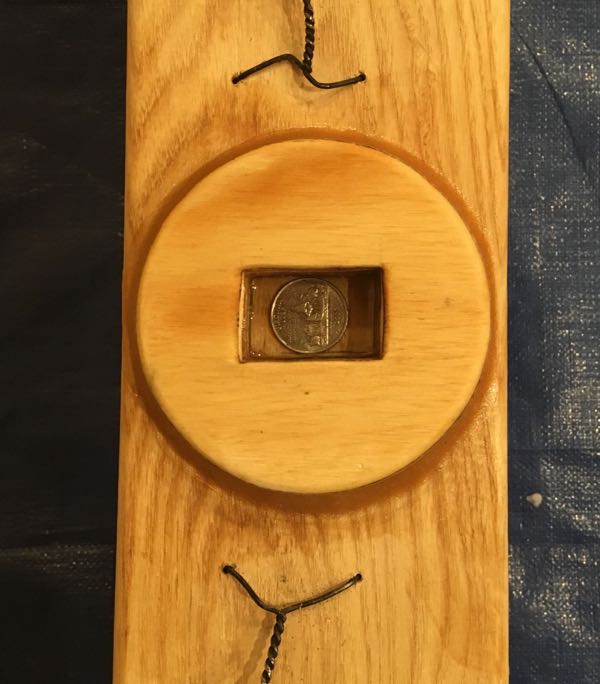 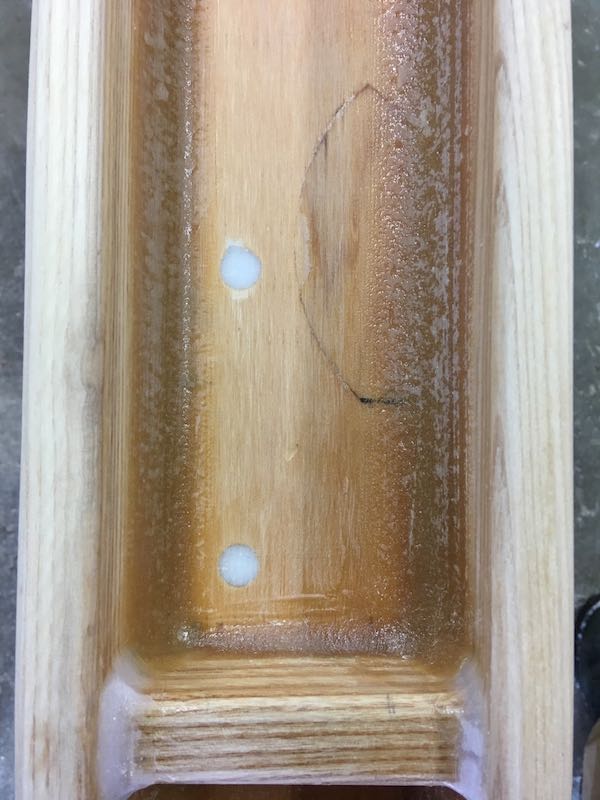 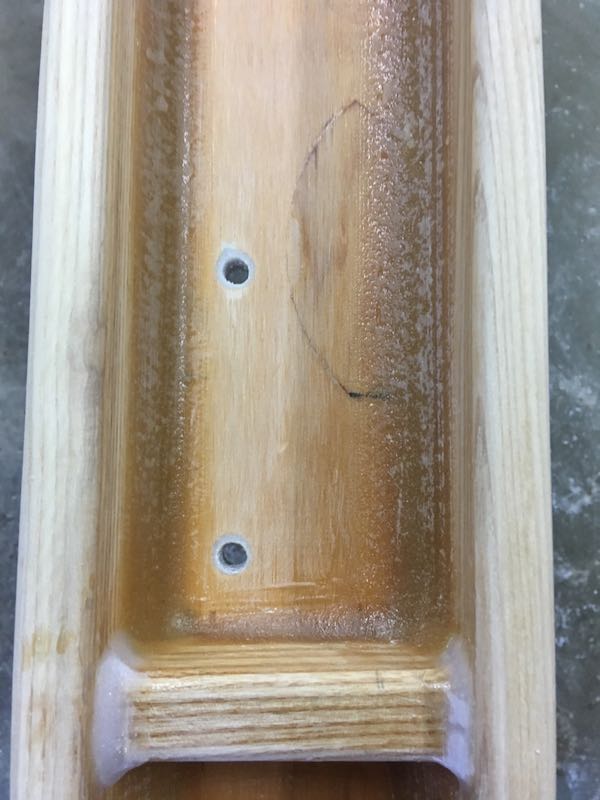 I created cleats for the beam ends out of various hardwood scraps that I had - ash and maple and cherry. I finished them clear with varnish. And attached them with with bolts through over-drilled holes and sealed with butyl tape on the top.

I also added some blocking to the bottom of the fore and aft beams to hold rubber rollers. The roller on the fore beam will steady the anchor. And the aft roller will cushion the outboard shaft when it is in the up position.

I painted the beams a very nice orange! Which was a tedious job in itself. I’ll finish painting the bottoms once the beams are fitted to the boat. 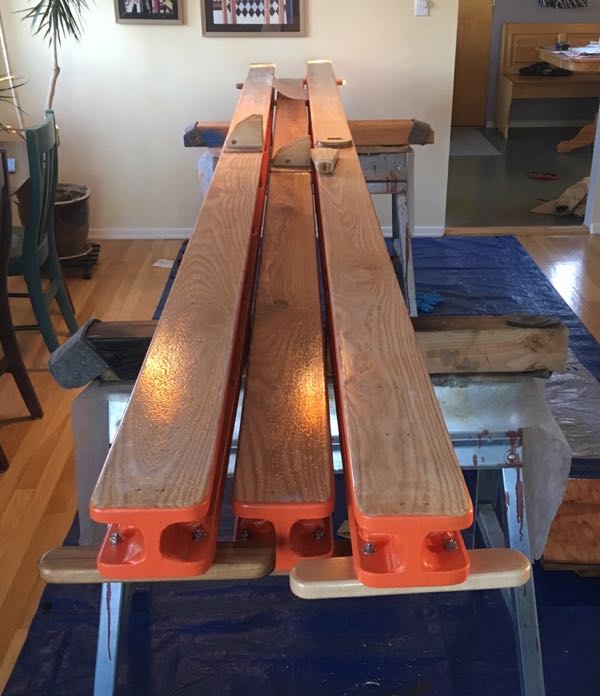