In January, 2017 I “retired” from computer work. My plan was to get my house ready to sell or rent and then spend the summer on the boat. Of course, work on the house took longer than I thought and I hadn’t finished house work until August. Where does summer go?!

Part of my delay in working on the platforms in 2016 was finding a source for marine plywood. After a lot of searching, I found that our local lumber yard, Power Townsend, could order Douglas Fir marine plywood from a supplier in Spokane. And it would be delivered to Helena in a week for no charge. Wow! And the price was great, too - $47 for 1/4” plywood. Compared to $200/sheet to have plywod delivered from the Seattle area.

I built the center and side platforms according to the plans but I substituted 3/8” plywood for the top of the center plafform instead of 1/4”. After the previous center platform had collapsed I decided to overbuild it a little. I fitted my outboard motor as I went which resulted in cutting the transom a little lower. I also wrapped the transom in a piece of aluminum sheet to take the abuse from clamping the motor on.

I had some West epoxy left over from building Super Chicken ten years before so I started working with that. That was enough to glue the pieces together and fillet the bottoms. When that was gone, I ordered three gallons of DWX epoxy from Duckworks (since discontinued). I chose DWX because it was UV resistant and I wanted to finish the platforms clear.

I also rebuilt the fore platform. This boat came with two small trampolines with a wooden platform in between. The original platform was rectangular which didn’t fit the curvature of the bows with rectangular trampolines. I rebuilt it with a trapezoidal shape and added some anchor handling to the front platform and beam. The fore platform is not in the Wharram plans but I liked the idea of a hard surface up front for dealing with the anchor. I hope the additional weight up front doesn’t cause the bows to dive into waves. 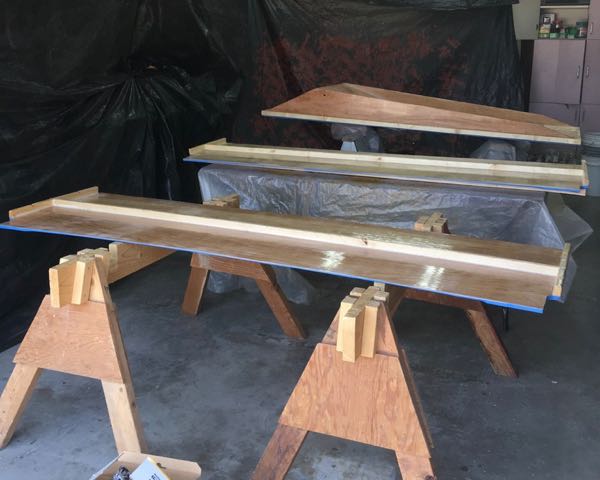 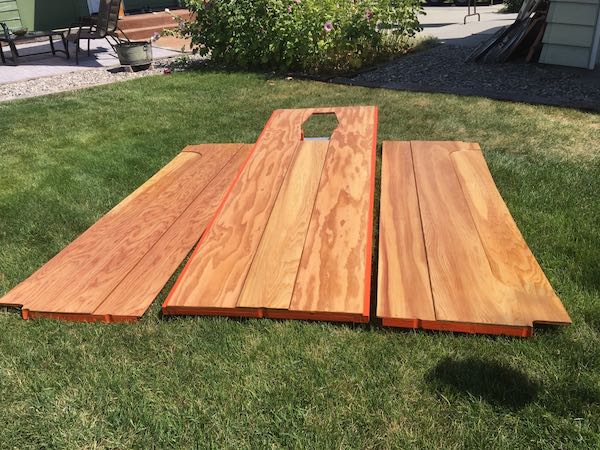 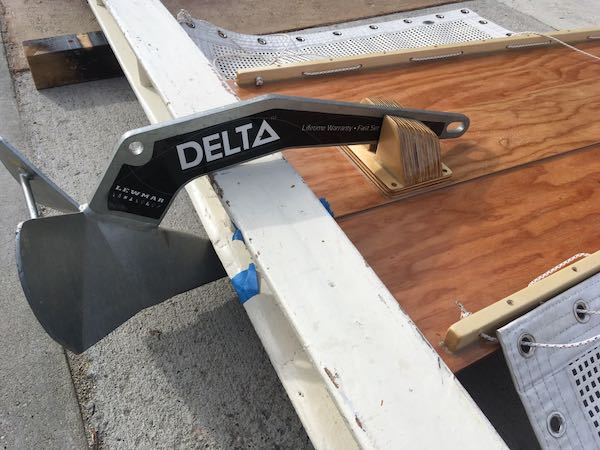 Update: After the platforms had been in the sun on the trailer for most of a year the platforms had checked and the epoxy cracked. I learned that Douglas Fir will always check and should be covered in fiberglass to prevent that. A later post covers adding the fiberglass.