In June, 2016 I drove from Helena, Montana, USA to Bobcaygeon, Ontario, Canada to pick up my pre-owned Wharram Tiki 21. I was very excited to get my new boat and to see some parts of the world that I hadn’t seen before - the Upper Peninsula of Michigan and the North Channel of Lake Huron (a famous cruising area). Unfortunately, I didn’t have much time off from work to spend time in these areas so it was just a quick drive through and back - 4,400 miles in 7 days. Ugh.

In Bobcaygeon, I met Jerry and his wife. Jerry was busy building another catamaran - a 24 ft Thomas Firth Jones design. He said that the Tiki 21 was too small for him and his wife when cruising the St. Lawrence and was building something with a roomier cabin. (By the way, the next winter I saw the 24 footer he was building for sale in a classified in Small Craft Advisor. I now pity whoever bought that boat.)

As promised, Jerry had made sure that the trailer was ready for a long haul. The trailer tires and spare were new and he had repacked the wheel bearings. I had hoped to spend some time talking about the boat, but Jerry was busy. So I loaded and was on my way after handling paperwork. The most exciting part of the drive home was catching the ferry across Georgian Bay - from Tobermory to Manitoulin Island. The trip was gorgeous and it was funny to me to have my boat on a boat! 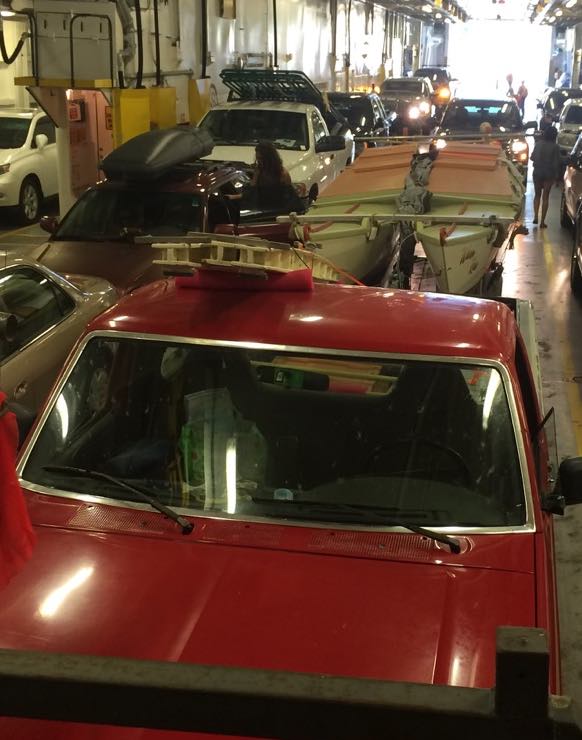 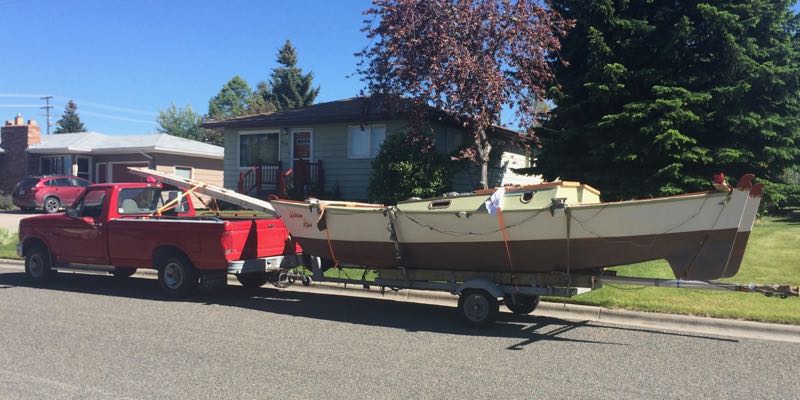 Once home I was anxious to launch the boat, especially since for the first time ever I had rented a slip to keep the boat in. My neighbor and sailor, Rich, volunteered to help with the first assembly and launch. We spent a few hours at the ramp at Magpie Bay on Canyon Ferry Resorvoir and had the boat in the water. I motored over to the slip at Kim’s Marina and tied her up. I wanted to take her for a sail but I wasn’t comfortable with the boat after assembly.

During assembly, some things were looking and sounding bad. I heard some creaks and cracks from the platforms and noticed some rotten areas. On my next visit to the boat I wanted to look at the platforms closely so I removed the outboard. Good thing that I did! I was standing on the center platform looking at some bad spots when I heard a big crack! The center platform fell in the water just as I jumped onto the cabin. I retrieved it and found that the aft end had cracked apart where it sat on the beam.

I took the platform home with plans to repair it. I left the boat in the water thinking it wouldn’t be too long before I was sailing - haha! I found lots of problems with the platform so decided I needed to rebuild it from scratch. But summer flew by with house projects before I could work on the platform. I eventually decided it was a good test to leave the boat in the water to check whether the hull was watertight. That proved true - not a drop all summer. But I now know that the three months in the water did show some problems - water entered and rotted the rudders and skegs.

I pulled the boat out of the water in October with lots of help from my son Matt. We tipped one of the hulls on its side in the water while transitioning to the travel beams. This confirmed that I wanted to change the trailer to have telescoping arms so that travel beams weren’t necessary. I put the boat away for the winter and spent time studying the plans. There was a lot of work to do! And more that I didn’t even know about yet.

So, 2016 was a bust for sailing. But at least the boat had been in the water. I anticipated rebuilding the platforms in the spring of 2017 and then setting sail. HAHA!!